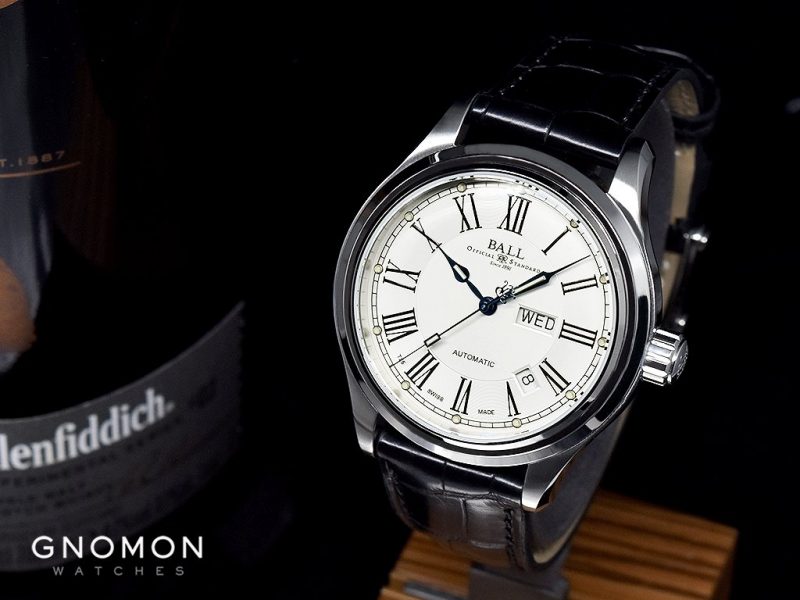 On the 19th day of April 1891, there was a collision of two trains in Kipton, Ohio. The accident resulted in the death of engineers of both trains. From the official news, an engineer’s watch stopped running for four minutes before restarting which led to the accident. After that day, the people of the era started to acknowledge the importance of proper time standardization for rail transport. In addition, an accurate standardization of watches was necessary to be used by rail transport’s workers. That was the beginning and the birth of Ball railroad watches.

The Lakeshore and Michigan Southern Railway employed Webb C. Ball as the Chief Time Inspector to examine the watches and set a new standard of watches used for rail transportation. After a thorough investigation, Ball decided to set an official RR Standard (RR stands for the railroad) to ascertain the right timekeeping devices for railroad workers. Then, the workers should bring their watches to be checked regularly at the Ball Time Service once every two weeks.

Since punctuality is the key to every sort of rail transportation, it’s essential to make sure that the watches have no difference in telling the exact time. After such an accident, now it’s very much clear that having the right timepiece on the wrist decides the matter of life and death. As it’s a must for the train employees, strict criteria must be maintained to produce the reliable Ball railroad watches.

This is the third of a three-part series addressing some highlight moments throughout the development of watches:

What is a railroad watch?

As the name suggests, a railroad watch is the standard watch used for railroad employees. The RR Standard for Ball Railroad Watches has a level of quality in which the watches must meet the following requirements.

First, there is no cover on the dial with the watch size being 44.86mm or 43.17mm. For better legibility, the watch’s dial should use bold black Arabic numerals and handsets on top of a plain white dial. The watch needs to have a winding stem at 12 o’clock position, a minimum of 17 jewels, a double roller, and a lever-set. Also, it’s adjusted to 5 positions and temperatures of 40 to 95 degrees Fahrenheit.

The last is the watch’s accuracy is between ± 30 seconds per week. The General Railroad Timepiece Standards distributed these strict criteria to be used in several railway companies in the United States.

With the long heritage of Ball railroad watches, the watch company stays true to the needs of accurate timekeeping devices for train workers: the conductors, engineers, firemen, and rear brakemen. Ball railroad watches are all about accuracy under adverse conditions. One of the examples is the Trainmaster Standard Time Ref. NM3288D-LBRJ-WH.

Ball releases that classic timepiece to commemorate the 135th anniversary of the rich heritage. Limited to only 1000 pieces, the watch has what it took to be under the Trainmaster collection. The striking contrast of black Arabic numerals and the white dial shines legibly under the night. It uses the Ball RR1101 automatic caliber based on an ETA 2892-2 with a 42-hour power reserve. You can see the small window of the date at the 3 o’clock position.

Its sister, the Trainmaster Standard Time Chronometer Ref. NM3888D-LL1CJ-WH is also a perfectly reliable timepiece for railroad workers. The watch’s automatic caliber BALL RR1105-C is officially certified by the COSC as an automatic chronometer. The addition of seconds subdial gives the watch a better reading of the exact time at hand.

Both watches have tritium gas tubes in the handsets and on the dial, in which you won’t have a problem reading the time at night. These two pieces are made for either a dress or sports watch which upholds the wearer’s comfortability. With a 30m water resistance, it’s able to withstand water splashes.

Another one to take notice of is the Trainmaster Roman Ref. NM1058D-L4J-WH. It differs from the previous two watches as it has the Roman numerals on the clear white dial. Roman numerals are a great choice for the watch to have a stylish and elegant look. Made of stainless steel for the case, and anti-reflective sapphire crystal for the front and back, it’s tough albeit being as a dress watch. Furthermore, the watch has an additional complication of a day-date window. It can resist water splashes from swimming and cold water showers for the watch is resistant to 50m water.

The railroad watch history might start with an unfortunate accident yet there is no improvement without failure. Alongside the origin of railway standard time in the United States, Ball railroad watches are the prime representative of excellent timekeeping devices.

They are made from high-quality materials: stainless steel, sapphire crystal, and crocodile leather strap. The collection has every piece of resemblance to the very firsts of classic railroad watches with the Ball signature of an Official RR Standard on the dial.

Previous
8 Stylish Watches for Christmas Gift (Including Yourself)

Next
Oris Caliber 400: The Refinement for Mechanical Timepieces