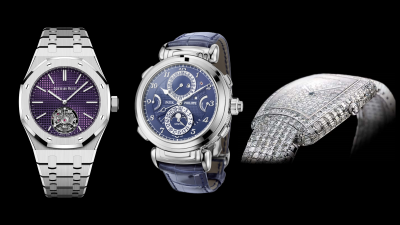 The Reputable Holy Trinity Watches in the World of Horology

For every now and then

In the world of horology, there are many specific terms that refer to particular items or parts of a timepiece. Among many names out there, the title “Holy Trinity Watches” is often heard or mentioned every now and then. Surely, it may not sound foreign to watch enthusiasts who have been around for a while in this field.

The term “Holy Trinity” itself refers to the big three Swiss watch brands, which are Audemars Piguet, Patek Philippe, and Vacheron Constantin. Despite the fact that the number of watchmakers has grown over time, the Swiss high-end brand trio has remained the industry’s powerhouses for more than a century.

As luxury brands, the Swiss Holy Trinity Watches present the highest form, luxury, and legend of watchmaking. Each brand offers the best of the best quality when it comes to the watch materials, manufacturing mastery, and a long line of craftsmanship in the industry. It is no wonder the three titans continue to stand tall and earn respect to this day.

What are the Holy Trinity Watches?

Among many high-end Swiss watch brands, the holy trinity watches hold the most prestigious title. Each brand is regarded highly for its high level of craftsmanship, which leaves a legacy in the watchmaking industry.

So, what makes each of the holy trinity watches brands different from the rest of the high-end watch brands around the world? While so many brands identify themselves with in-house movements, the big three watchmakers from Switzerland focus on the intricate complications that make their crafts highly valuable and incomparable.

The holy trinity of watches from Switzerland continues to implement traditional techniques of watchmaking to this day. Each movement is hand-finished and assembled intricately to the point of making sure the concealed movement is decorated perfectly.

Getting to Know Each Holy Trinity Watches Brand

When it comes to craftsmanship in watchmaking, Switzerland reserves a special spot for it. As the heart of the watchmaking industry, the country is known for its excellent watches and ski tourism that consistently produces many high-end timepieces over time. Among many of them, the holy trinity watches are known for their legacies in the world of horology.

Audemars Piguet, Patek Philippe, and Vacheron Constantin have all been regarded highly for their mastery of watchmaking. Each brand boasts its own signature on every luxury wristwatch it ever releases. Not only that, the three titans continue to keep innovating with their inventions and present their creations in the most sophisticated way possible.

It may not be a surprise to know that the three renowned Swiss brands share a long history of watchmaking. Each of them has specific characteristics that are hard to miss as well. In order to know more about the affluence these three titans have, let’s check out the information below.

Let’s start off with the brand created by two renowned watchmakers from Switzerland, Audemars Piguet. Their partnership began in 1875, and most of their inventions focused on the high technicality and intricate complications of the machinery.

As one of the Swiss Holy Trinity Watches, Audemars Piguet has several iconic items that leave a legacy in the world of horology. One of the brand’s early inventions that made a breakthrough in the way of watchmaking was the first-minute repeating movement in 1892.

From then on, the duo continued to craft the highest quality wristwatches after their successful invention, with the first skeleton watch the world had ever seen in 1934 and a cutting-edge thin timepiece in 1986.

However, Audemars Piguet’s most well-known creation that leaves a lasting legacy in the world of horology is the Royal Oak. The iconic wristwatch was first introduced in 1972. It has an impressive design that combines sports and luxury in a way that was unheard of before.

The Royal Oak is still considered one of the best luxuries watches to ever exist. It is made of robust stainless steel and crafted so meticulously with the highest level of craftsmanship. The design was created by Gérald Genta. It took inspiration from traditional diving helmets.

The invention of Royal Oak solidified Audemars Piguet’s place as one of the three undisputable titans in the watchmaking industry. As of today, the renowned Swiss watch brand strives to craft each of its timepieces intricately and showcases its best qualities to watch enthusiasts around the world.

As one of the most renowned brands in the world, Patek Philippe is easily the best candidate for the holy trinity watches. This luxury brand from Switzerland is known for its luxury qualities and masterfully crafted machinery.

Patek Philippe was founded in the year of 1839 in Geneva. The iconic luxury brand crafted masterful complications and popularized them. Among many of its masterful creations were split-second hands, perpetual calendars, and chronographs.

Originally known as a pocket watch maker, Patek Philippe made its way into renowned luxury wristwatches to this day. In this era, the Swiss luxury brand focuses on elevating the masterful craftsmanship that has become its lasting legacy in the world of horology.

Among many of Patek Philippe’s iconic collections, Grandmaster Chime holds the most prestigious title of being the most expensive watch to be sold at an auction for $31.19 million. The price itself is justified by the intricate machinery that includes a reversible case, two dials, 20 complications, and six licensed variations.

Other than the grandiose Grandmaster Chime, Patek Philippe also has other types of wristwatches that fit both elegant and sporty styles. If you seek a proper dress watch, you can look for the Calatrava series. On the other hand, you can check out the Nautilus series, which looks more fit and stylish for casual and formal events alike.

Last but not least, it is time to get to know Vacheron Constantin, the oldest brand on this list. Founded in 1755 by Jean-Marc Vacheron, the Swiss brand’s focus was on manufacturing luxury clocks and watches.

As one of the renowned Swiss Holy Trinity Watches, Vacheron Constantin is known for its unique qualities in watchmaking technique. The famous brand is known for its harmonious technique of blending French style and Swiss technology.

Vacheron Constantin left a mark in the history of horology as the first company that produced interchangeable watch parts. Nonetheless, one of the brand’s most renowned inventions was the inaugural complication in 1770 and engine-turned dials in 1779. Both of the iconic creations showcased the luxury brand’s devotion to art and culture.

One of Vacheron Constantin’s well-known creations is Kallista. It was the most expensive watch ever made in that era, which cost $11 million, spotting 118 emerald-cut diamonds. The manufacturing process took 20 months and 6,000 hours.

Kallista itself means “the most beautiful” in Greek. Such a masterpiece was the result of a collaboration between talented artists such as Raymond Moretti. Along with its dazzling beauty, the diamond-covered wristwatch was also equipped with the Swiss best mechanism, making it a magnificent creation, both in aesthetic and technical aspects.

At last, we have come to the end of the article about the Holy Trinity Watches. Each of the brands is regarded highly for its intricate and masterful craftsmanship. To own these best and most carefully crafted watches, one must pay a hefty amount. It is a fair and worthwhile experience for many luxury timepiece seekers who value quality in the world of horology.

Next
The 6 Best Orange Dial Watch Recommendations for Diving