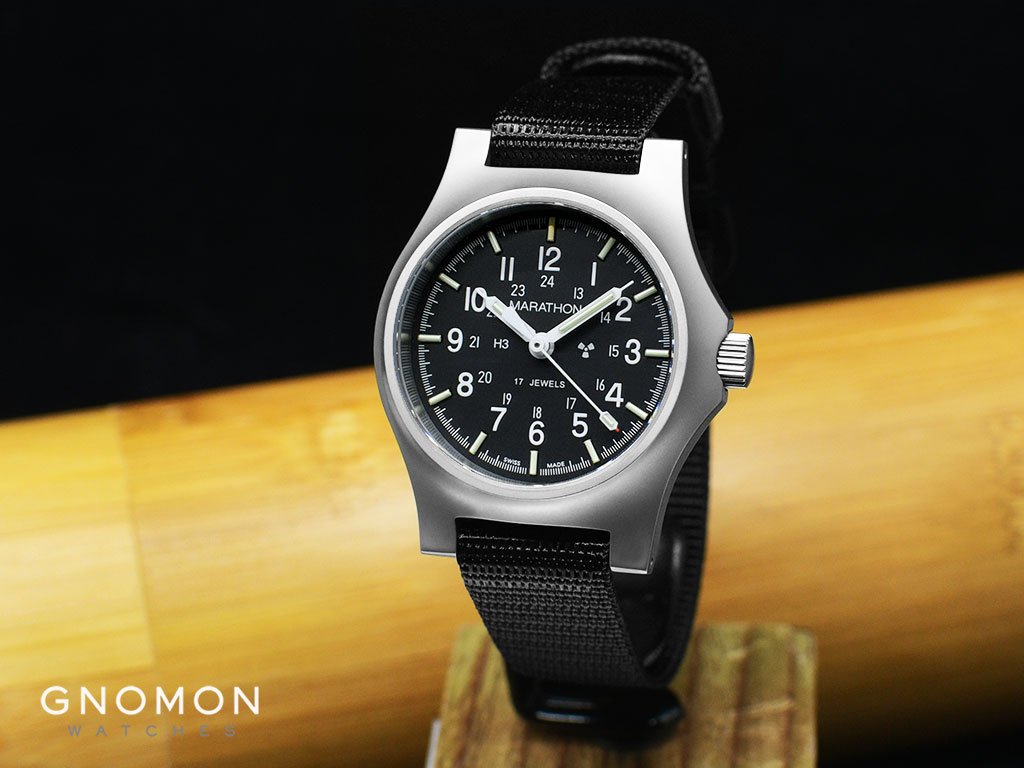 Impressive and genuine in its historical story

The origin of military watches can be traced back to the late 19th century. The production was made out of necessity to equip soldiers with personal devices for accurate timing and coordination. By that means, the watch must compromise standardized requirements to cover the needs.

In most cases, it should be able to withstand harsh environments, durable, rugged, practical, accurate, and certainly water-resistant. Besides, most of the watches have a simple design, uncluttered watch dial layout, and extreme legibility. All of these requirements have pushed the development of military watches to be well-performed.

Soldiers are allowed to equip their own wristwatches as long as they conform to the requirements and fulfill the standards. As an example, the US Marines state that self-equipped watches should be inconspicuous while the US Navy Uniform Regulations allow watches that are conservative and in good taste. So basically, every unit in the military field could have different regulations when it comes to their standard watches. This is understandable considering different situations and activities required in certain services.

As an indication of affiliation with military units, a watch brand usually puts official markings on the watch. That way, not only that it would attract customers’ attention but also add a significant story to the watch. However, most of the military watches today only take the design and, thus, are called military-inspired watches. Back then, a particular watch brand would officially be affiliated with a military unit and had an official government issue as its identity.

A hidden gem of best military watches from Timefactors that deserves impeccable amazement among the watch collectors. The Precista Royal Navy Diver has a genuine history to be on the top list. A sturdy look that exhibits simplicity and durability for harsh outdoor activities. The watch reissue is truly a symbol of just a simple timepiece that might look familiar among military watch lovers. But, this reedition has been awaited by many as the original watch was only issued in 1981 and 1982 only. Therefore, it is considered a rare watch of all British issues.

It has an asymmetrical watch case that adds value to its origin – a typical design for a plethora of military watches of the period. As such, the watch would look bigger than its actual diameter. Yet, the highlight of the watch lies in its watch hands. They feature the classic snakehead hands coated with Super Luminova. To top it off, the watch is paired with a silicone strap for optimal wearability

Another reintroduction of military watch gem from the Timefactors. Only at a glance, you would recognize the story behind this Smiths Military PRS-29AM. A vintage look with a clean and simple watch dial. The Smiths PRS-29AM was only issued from 1967 until 1970 and was the most popular of all British military watches. Here is the reintroduction that has gained attention as, recently, the watch is considered more affordable than others.

Although this is a typical men’s military watch, it is not a large watch as it’s measuring only 36mm in diameter. The design is actually quite far from the original. The development of this watch incorporates new improvements and it is almost built from the scratch. A hi-dome sapphire crystal, well-finished watch case, 100m of water resistance, anti-magnetic cage, and drilled lugs with shoulderless spring bars.  At the gem of the watch is the manual wind ETA 2801-2 that winds smoothly. Further, the watch has been allocated a NATO Stock Number (NSN).

Luminox has been known as a brand that produces timepieces with a military-grade and even makes custom watches to fit the military needs. The company has been affiliated with several military units, such as the US Air Force, U.S. Bobsled Team, U.S. Navy SEALs, and U.S. Coast Guard.

Therefore, if you are looking for an exceptional trust for a military watch, the Luminox collection could be a great choice. The Luminox 3001.EVO.OR is one of its kind that was produced in affiliation with the SEALs. In this affiliation, an ultimate timepiece is produced with a license and approval by the US Navy authorization.

Measuring 43mm in diameter, the watch comes with a distinctive narrow dial opening paired with a uni-directional rotating bezel around. This timepiece also has excellent legibility, especially in a dark environment. And to make it perform reliably, the Swiss Quartz runs inside its screwed-in case back.

Read also: The 5 Best Watches with Tritium that Glow Constantly

A combination of luxury and reliable military watches. The Bremont Argonaut is our recommendation for a taste of prestige, significant history, and definitely a high level of timepieces. The Bremont company itself has been partnered with the Ministry of Defence (MoD) honoring Her Majesty’s Armed Forces.

The affiliation has been started when the company provided the British Army with the original ‘Dirty Dozen’ watches during World War II for the soldiers. As such, Bremont watches are marked with the emblems of the Royal Navy, British Army, and the Royal Air Force, which can be seen on the case back.

The Argonaut itself is a dive watch that is inspired by Greek mythology and synonymous with Navy history. This 42mm military dive watch features a hardened steel case and an internal rotating bezel. As to how a reliable dive watch should be, it is equipped with 300m of water resistance and extreme legibility including in a dark environment.

The dial design is heavily inspired by the ‘Dirty Dozen’ black metal dial with custom mint color Super-LumiNova. Taking a closer look, you’ll realize the delicate beauty of its Orange minute hand that sets contrast on the dial background. A true definition of best military watches.

The Canadian watch brand has been affiliating with the military since 1941. Marathon is one of the popular brands when it comes to military watches. Their long journey in making a sturdy and rugged piece for the military has been acknowledged by many. They’ve been producing watches for the Allied Forces. Until today, the fourth generation of the family still continues the tradition with significant development over years.

The Marathon GPM Government Reissue Mechanical is made with a classic and non-flashy design yet well-built to suit rough activities in the military. The GPM stands for “General Purpose Mechanical”. The watch comes in a perfect size, measuring 39mm in diameter that would sit perfectly on the wrist. It has a simple watch dial design and clear legibility as how a military watch should be — only essential indices are on board.

Further, the mark “Marathon, US Government” is written at the top to indicate the series as part of the official government reissue. A combination of the roughness in the military and Swiss craftsmanship creates a robust military watch for men.

The Seiko 5 SNK805 Stainless Steel Watch is a military-inspired watch that exhibits durability and performance as in military watches. It is driven by the Seiko Caliber 7S26 automatic movement to make the watch runs accurately for a precise timing device. The watch is pretty simple and has a vintage vibe yet is cool at the same time.

This watch could be a great pair for casual outdoor activities, such as an afternoon stroll or even an adventurous one. It has a high level of performance and a sleek-looking face that resembles the early design. Aside from having a reliable performance, this watch would make a good value for your money as it’s more affordable than other watches at the same rate.

While you might be looking for some military-inspired watches, Steinhart has introduced its latest collection. The Flighttimer Vintage Military design is inspired by military watch design. The durability and simplicity of military watches are implemented to make a retro-like chronograph watch. A classy design that certainly would spark interest among chronograph lovers.

Well-placed in a 44m titanium case, the watch displays a clean dial with two subdials for the chronograph function. The elapsed minutes at the 12 and hours at the 6 o’clock position. Every marker on the board has been well-treated, a superluminova old radium lume for the markers and watch hands.

Each of the elements blends in harmony against the matte black background paired with a beige canvas strap. The ETA Valjoux 7750 Elaboré Premium is the driving power of the watch to perform reliably.

After all, military watches are popular not only because of their durability and practical function. Traced back to its origin, this type of watch has been part of the military services as a reliable tool to be the time-teller, direction coordination, time measuring, and even distance calculation.

Therefore, no wonder that the reissue of the watch is the most awaited collection among military watch enthusiasts. It is not only sturdy and rugged but also exhibits the passion and bravery of the soldiers.

Next
A Month on the Wrist: Dievas Vortex 500 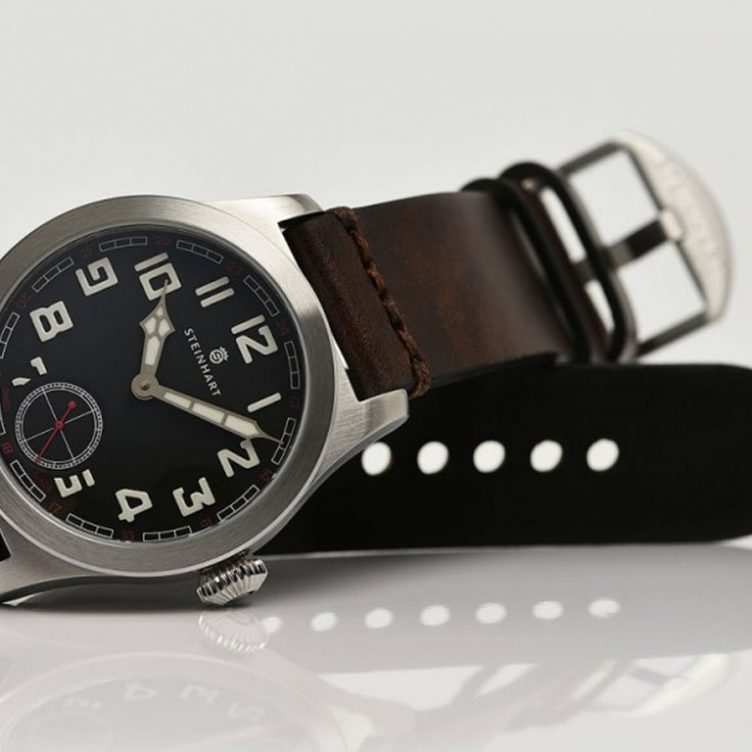 Which Hand Do You Actually Wear a Watch? (Right or Left?)
View Cart Checkout Continue Shopping